BrandCulture is devising wayfinding strategies for sports stadiums in Australia and overseas. Here are a few tactics to reduce the anxiety of navigating large, complex venues.

Sport unites people in countries all over the world, but in Australia in particular, it is embedded into our psyche, which is why it’s great to see more investment in suburban sports facilities.

The NSW Government is investing $40m in 22 projects as part of the Greater Sydney Sports Facility Fund, and a total of $100m over three years. It’s an initiative that will improve the liveability of local communities through new and upgraded sports facilities. Meanwhile, in May the NSW Government postponed its redevelopment of ANZ Stadium, vowing to invest $810 million in job-creation programs instead. There is talk that some of this money could be redirected to upgrading suburban sports facilities and stadiums such as Leichhardt and Brookvale Ovals, and Panthers and Campbelltown Stadiums.

These are both important initiatives because suburban sports stadiums are just as vital as quality large-scale stadiums, and we think Sydneysiders deserve both! Our studio is currently involved in the upgrade of sports stadiums in Australia and overseas, and our research reveals some fascinating design and architecture trends around the world.

These days, fans want it all. As Populous says: “Whereas traditional sports fans may be content to simply ‘spectate’, new generations of fans demand something more”. They’re looking for “participatory experiences” beyond the game itself: delicious food, craft beers, comfortable seats, lots of shops, parking and public transport options, music and entertainment, and most importantly, atmosphere by the bucket load.

As a result, even suburban sports stadiums are having to upgrade and renovate more often. To cover the costs of constant upgrades, they need to explore new revenue streams. This means evolving into multi-use, agile sports precincts where technology is used to transform spaces from one purpose to another. Tottenham Hotspur Stadium’s retractable pitch is an impressive example, but even community sports stadiums are interested in hosting more corporate and community events and smaller functions to drive revenue and entice people to stay longer.

It may not be too long before we see even more futuristic innovations at sports stadiums. Think drones that deliver food and drinks right to your seat; digital glasses that overlay sports stats onto live-action; or matches played by holograms.

How wayfinding comes into play at sports stadiums

As sports stadiums evolve into agile, multi-use precincts, wayfinding comes into play as a vital tool to reduce the anxiety of being in a large crowd (particularly in COVID-times), and create more agile spaces.

It’s important to have an overarching wayfinding master plan for the entire site, so that directional signs are consistent throughout. It’s a good idea to invest in fixed signs and digital screens, as the latter can be updated in real-time, or inform people of public transport updates, walking distances and accessibility options. Intelligent wayfinding systems are especially helpful in times of emergency because they can be updated instantly.

We especially enjoy designing wayfinding systems for sports stadiums and entertainment precincts because they are evolving into such agile, multi-faceted environments. Each signage system should also consider back-of-house areas, with a separate strategy for drop-off zones and carparks to keep traffic flowing when games end, avoiding bottlenecks. Most of all, we are excited about the potential for using digital wayfinding technology to promote different venues within sports precincts, driving dwell time and consumer spend. We look forward to revealing more of our work in this sector very soon.

If you would like to discuss the benefits of developing a sports stadium wayfinding master plan, drop us a note via hello@brandculture.com.au. Pictured above: Santiago Bernabéu Stadium. Below: Tottenham Hotspur Stadium London by Populous; and Mineirão Stadium in Belo Horizonte, Brazil by BCMF Arquitetos. 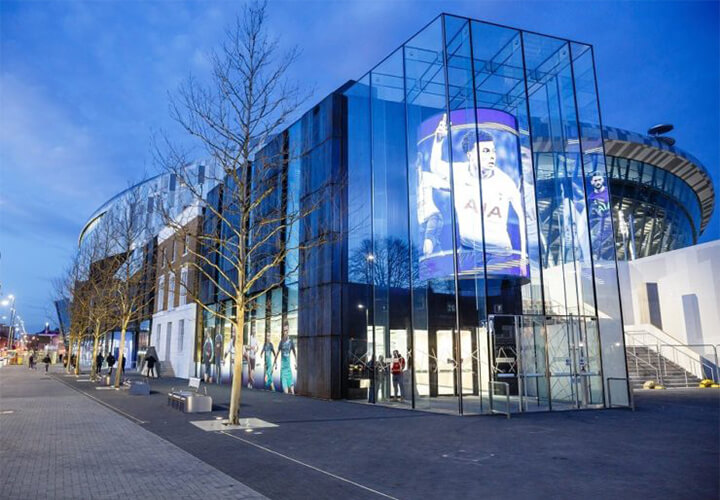