SEGD Sydney: How UTS made its campus smart 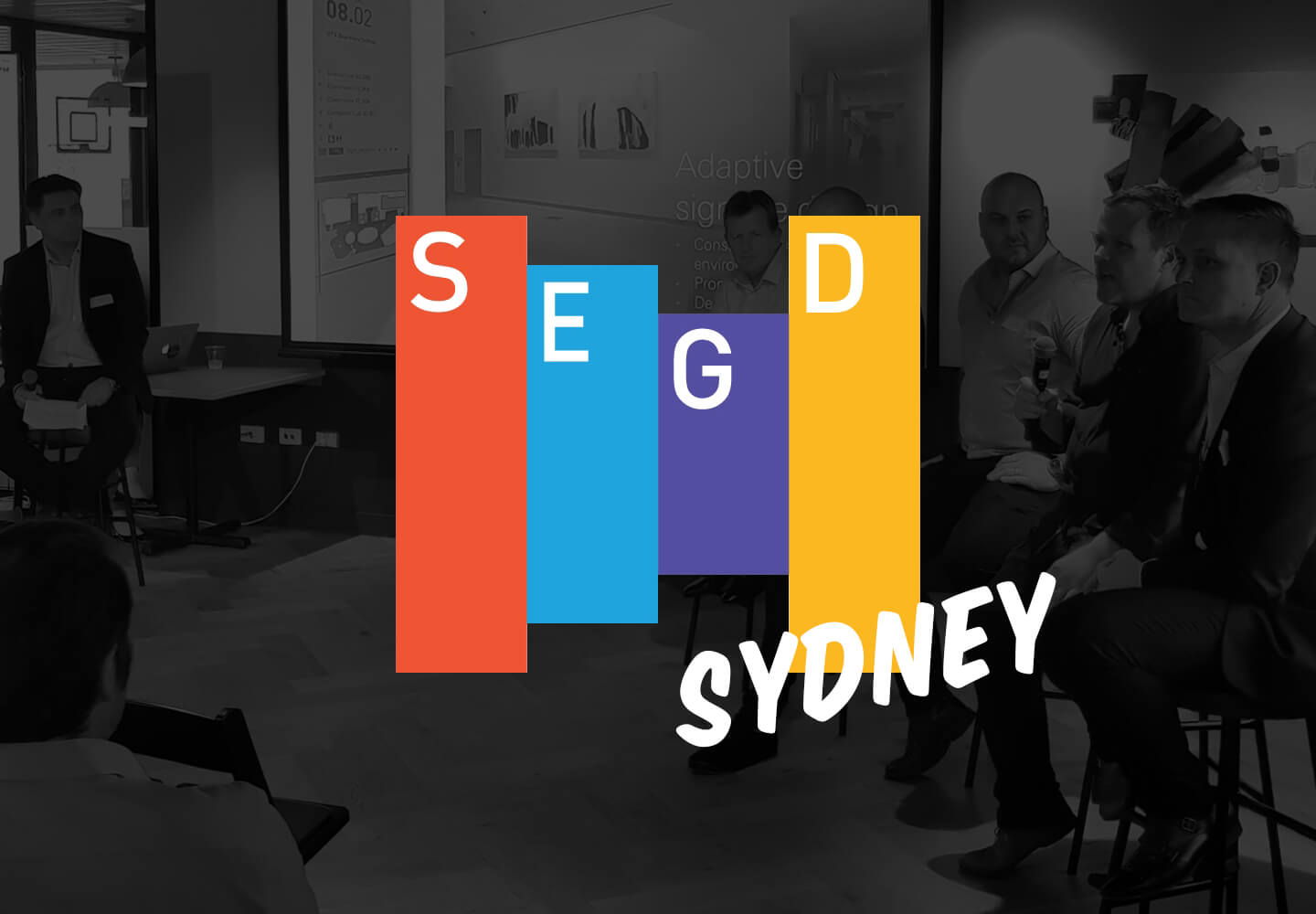 Last month, SEGD held its second event for Sydney’s experiential design community, when some of the key design practitioners involved in transforming University of Technology Sydney (UTS) into a smart campus got together to share their experiences.

SM: Tell us about the UTS $1+ billion master plan in terms of your wayfinding objectives?

BH: In 2013, Frost*Design completed a signage manual, and then BrandCulture won the tender as head consultant for wayfinding implementation. This was a unique opportunity for UTS. Existing signage was over 10 years old so we wanted a new wayfinding system that would represent industry best practice, and match the university’s strategic vision. Unfortunately, the scope of work was not simple. There were four new buildings, 14 existing buildings, and major refurbishments. You can understand how difficult it was keeping design documentation up to date with so much changing.

SM: What key issues did you identify?

BH: The biggest issue was signage clutter. We did lots of student testing, and the main complaint was that there was too much signage, and it was overwhelming. We had a lot of redundant signage – universities are big organisations, and when someone changes their name, for instance, that name might appear on 20 signs across campus. We had no way of tracking this easily. Asset management and naming conventions quickly became important to us. We needed a much better solution for quality control, defects inspections, tracking costs and invoices. BrandCulture developed a fantastic interface for this.

SM: How did BrandCulture approach the signage implementation?

NB: We had over 110 floor plans to audit, and 46 new floor plans to design. It was a hugely complex project that required some smart solutions so that, at the very least, we could keep our sanity! UTS is a technology-focussed university, and finding smart solutions is part of their brand and cultural DNA. The solution that sprang to mind was a digital one. We decided to create a proprietary system that was bespoke to UTS, which we could outsource to suppliers and stakeholders – a cloud-based platform for cross-referencing photos, notes and sign details, which is now called PAM Wayfinding. By doing everything through PAM, it means UTS has a single source of truth for their databases to come together in.

SM: Bruce, can you take us through your digital wayfinding vision?

BD: The challenge for us was to make the campus smarter for lecturers and students getting to class. We did some in-depth user group interviews with everyone from international students, to campus security, to develop a clear picture of how technology might work for them. We realised we needed to address the issue of accessibility – in 2014, there were 1,200 UTS students who identified as having a broad spectrum of disabilities, and our research showed the iPhone as the option that worked for everyone. This helped us establish an information architecture concept: we wanted signs to be able to interact with people’s smart phones to support people from one location to the next.

SM: What was PAM’s role in implementing smart technology across campus?

SP: We went through a series of trials to find out if our solution was meeting people’s needs. By putting wayfinding in people’s pockets on their phones, we could share the 5,000 pieces of information we had stored in PAM about where people and places are located at UTS. PAM was developed in collaboration with UTS and its project stakeholders. It sits in the middle and brings all the mapping, audit images, floor plans and notes together, creating a single source of truth for building management and the FM database. By bringing the physical and digital together, it creates a live wayfinding CMS for the whole university.

SM: Nigel, you’ve been working with UTS also. Can you take us through your involvement?

NO: A few years ago, UTS approached Displayground to install some new displays. Stephen showed me examples of generative data visualisation, like the work of Refik Anadol in San Francisco, which takes data and turns it into art. For UTS, we wanted to take their new branding, which they’ve based around big data, and have a play with it to see what we could achieve. The idea is to create interactive displays that use big data to connect into the UTS brand.